Ad blocker detected: Our website is made possible by displaying online advertisements to our visitors. Please consider supporting us by disabling your ad blocker on our website.

Bulkhead fitting, mated to 1" PVC irrigation line. Then to a PEX system manifold. Go crazy from there.

Be sure to paint or tape up the white PVC. Exposure to UV makes it brittle. Paint or electrical tape fixes that. And don't let it freeze:)
Check out Canadian Prepper Podcast on iTunes!

One is none, two is one.
Top

Hey, thanks for the response.
I took a look at "bulkhead fittings", but they don't look like the kind of thing I could attach to the mouth of a standard 5-gallon jug? 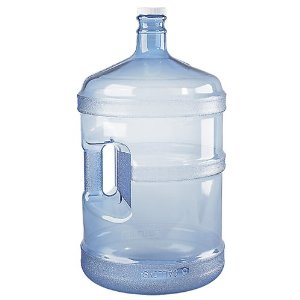 Are you suggesting I drill through the flat spot near the throat? I would prefer to keep the bottle in tact.

How about a rubber stop lid like we use to in science class for beaker's with two holes then two 1/4'' fish tank valves or pcv pipeing fittings you could get one to scew into the throat,then another piece of to sleeve it then cap it and work from there for water flow out.
I"ll nick a jug if can and work on it because I can use one to
underwater is safer than land
Top

That's a clever idea. I wonder if a cheap bathtub drain plug might also work? The rubber might be too hard, though, not sure that it would seal after drilling holes and threading piping into it.
I also wonder about flow. My recollection of those "science" rubber stoppers is that the glass piping through them was pretty tiny.

I actually saved a cap from a recent bottle, and it practically comes pre-made for this - the translucent center piece popped right out and the thin rubber gasket would last for a long time yet; I believe it is designed to be dropped onto a spike that pops the center piece into the bottle. If I can seal a segment of hose and clamp a PVC ball valve on it, it could work well. I'd have to collar it to the throat, so it would seal when turned upside-down. The only part that doesn't seem easy is allowing air to enter the bottle as the water is consumed, but I suppose the air could just move back up the hose through whatever tap/piping system I'd be hooking up to, I'd have to live with uneven flow.
I'll try and find some time to mess with that next time I get a break.

Wine making stores will have the cap you need,then some plastic tubing that you can cap or fold over and pinch the air tube
underwater is safer than land
Top

and look at the images.
Home Hardware has a simple wire stand and cap that allows gravity feeding.

I'm seeing a lot of pumps out there as well.

Got the opportunity to use one of these cradles (from Home Hardware) recently, it worked pretty well - air bubbles in through the spout as water comes out. The white cap-spout is designed to fit on a smooth-lipped bottle, not the "threaded" type. The fellow at the store said the type of 5-gallon bottles with the screw type tops have to get the threaded part of the neck cut off. Not willing to do that to my only polycarbonate bottle, will likely just buy an additional one with the smooth lip. Like this: